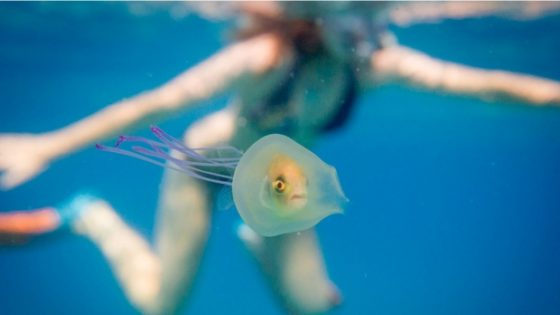 Australian photographer Tim Samuel captured the photos while freediving in Byron Bay, New South Wales, in December with his friend Fanny Plumridge, who is in the background of one of the photos posted to Instagram. (Tim Samuel Photography)

Fish trapped inside a jellyfish

Photos of a fish swimming inside a jellyfish may tell an amazing story, but it’s a story that likely didn’t end well for at least one of the two animals, scientists say.

Australian photographer Tim Samuel captured the photos while freediving in Byron Bay, New South Wales, in December with his friend Franny Plumridge, who is in the background of one of the photos posted to Instagram.

They feature a yellow fish whose body occupies almost the entire bell of a transparent jellyfish with purple tentacles. Its tail protrudes outside the bell, allowing it to “drive” the jellyfish around.

“I found a fish inside a jellyfish!” Samuel wrote in the caption. “He was trapped in there, but controlled where the jellyfish was moving.”

Samuel told CBC News in an email that the bell of the jellyfish was about six centimetres long and he photographed the pair near the surface for about 20 minutes before heading off in search of sea turtles.

CBC News sent the photos to a number of jellyfish researchers, including Lucas Brotz, a PhD student at the University of British Columbia, Michael Kinsgford, a professor at James Cook University in Australia, Luciano Chiaverano, a post-doctoral researcher at the University of Southern Mississippi, and Danny Kent, curator of B.C. waters at the Vancouver Aquarium.

All were impressed with the photos, which Brotz described as “pretty cool!” The researchers had never seen anything like them.

Kent said several jellyfish experts he consulted couldn’t identify the jellyfish. Kingsford thought it was “definitely” not a box jellyfish, and suggested it could be a juvenile “scyphozoan” or “true jellyfish,” the group that includes most familiar jellyfish such as moon jellyfish.

Brotz and Chiaverano weren’t sure what kind of jellyfish it was, although they thought it was likely a box jellyfish.

Box jellyfish are highly venomous and prey on fish.

“They evolve to kill prey instantly,” Chiaverano said. “This might be a case where the prey is too big to kill it right away, so the fish might have some time to swim around inside.”

The fish does appear to be inside the jellyfish’s stomach, he said.

But normally, box jellyfish eat prey that are only about a third or quarter the size of their bell, he added.

“That’s one of the reasons why I think this is weird,” he said. “I think it could have been an accident.”

Kent said it didn’t appear that the fish was affected much by jellyfish venom. He has another theory.

He thinks the fish looks like a type of jack or trevally — a group of fish that often hide under the bells of jellyfish when they are young.

Of course, normally they hide under jellyfish that are much larger than they are, he said.

He, too, thought the encounter was likely an accident: “Accidents happen in nature as much as they do for us.”

One of the photos shows what looks like an opening near the front of the bell, Chiaverano noted. That’s not typical of a box jellyfish and is likely an injury from the fish trying to get out.

“It’s probably not going to end well for the jelly,” he said.

Chiaverano was even more pessimistic. He thought both creatures would likely end up dead, with the fish succumbing to the venom eventually and the jellyfish unable to digest it.

But he also suggested one less morbid possibility — that the photo could be fake.