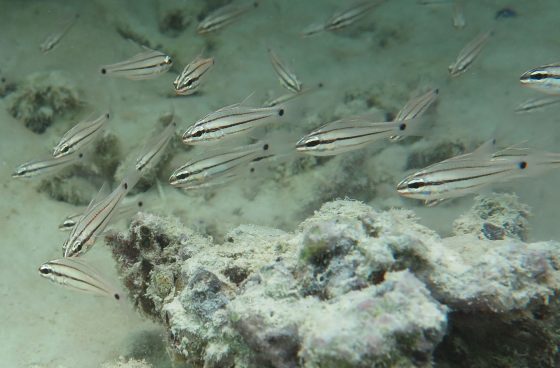 A groups of adult cardinal fish Ostorhinchus doederleini near a cave

Article from the New York Times

The larvae of fish that live in coral reefs are tiny, and they are not very good swimmers. They are pushed by currents away from the reefs on which they were hatched for days or weeks until they learn to swim. Then, somehow, around 60 percent of them make their way back to their birthplaces, where they spend the rest of their lives.

Scientists know that they can navigate using the position of the sun by day. But they find their way at night, too, and now researchers think they know how: They are magnetic.

Researchers collected cardinalfish near One Tree Island in the Great Barrier Reef.

Researchers studied the larvae of Doederlein’s cardinalfish, Ostorhinchus doederleini, a reef fish that grows to about five inches long. They collected specimens near One Tree Island in the Great Barrier Reef, off the northeast coast of Australia.

When the larvae hatch, currents carry them north-northwest, and experiments have shown that they consistently swim south-southeast guided by the sun back to their birthplace. But to see whether magnetic forces are also at work, the researchers tested them by using a device that creates a uniform magnetic field whose direction can be manipulated.

With the larvae in a tank surrounded by the device, the scientists turned the earth’s normal magnetic north 120 degrees clockwise. The fish followed right along, swimming in the direction the researchers steered them. The study is online in Current Biology.

The lead author, Gabriele Gerlach, a professor of marine biology at the University of Oldenburg in Germany, said that many other marine fish and invertebrates “have the same behavior — they hatch and then are washed out into the ocean for days, weeks, even months. And they might have this same magnetic orientation behavior.”