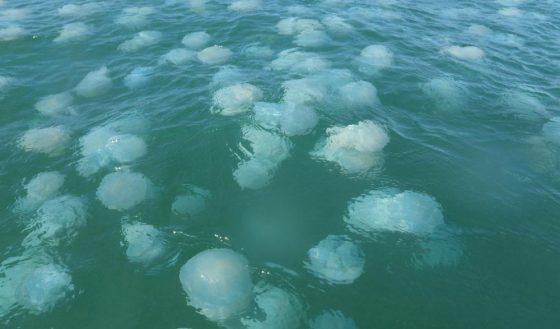 Australian Geographic – what are jellyfish anyway?

How do they swim? Do they have brains? From notorious box jellyfish to innocuous blubbers, jellyfish are as strange and diverse as they are common.

WITH A REPUTATION for causing stinging pain, paralysis and even death, jellyfishes are considered some of the most dangerous creatures in Australian waters. But – aside from their habit of inflicting trauma in unsuspecting swimmers – many of us know little about these fascinating marine stingers.

And understanding the multitude of jellyfish found around Australia isn’t an easy task.

For starters, jellyfish are part of a group called cnidarians, of which there are more than 10,000 species, including corals, sea anemones and hydroids (polyps). They fall into this collective due to shared characteristics, such as symmetry of the body and stinging cells called nematocysts. 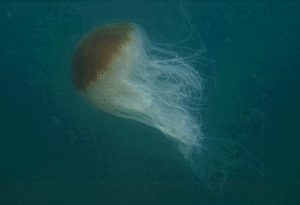 With a bell up to 2m and tentacles that trail for 15m, the lions mane jellyfish is the largest of all species found in Australian waters. (Image: Mike Kingsford)

But jellyfish vary greatly in biology. For example, some are only 1cm in size, while the lion’s mane (Cyanea capillata), the largest of all species, has a bell span of up to 2m. The lion’s mane tentacles can also trail for 15m, whereas the common jelly blubber (Catostylus mosaicus) has short tentacles.

The lion’s mane and blubber are “true” jellyfish, or Scyphozoans, which live exclusively in saltwater. The infamous box jellyfish, however, belongs to the Cubozoa subgroup, while a third, diverse subgroup of tiny jellyfish is known as Hydrozoa. There are thought to be around 3700 species of Hydrozoa, including a mix of solitary and colonial animals, such as bluebottles. 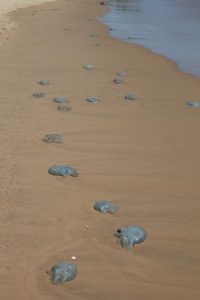 The jelly blubber is a common sight on Australian beaches.
Pictured here at Town of 1770, Queensland.
(Images: Mike Kingsford)

Dr Mike Kingsford, a professor in marine biology at Townsville’s James Cook University, says the majority of Hydrozoa jellies only reach 1cm, while the biggest is no larger than about 10cm.

One of the most interesting facts about jellyfish is that they swim, as opposed to bluebottles, which are at the mercy of wind and current. This is despite the fact jellyfish don’t have brains and are defined as plankton, which means to ‘passively drift’, explains Mike.

“They’re probably like a very cheap calculator that can actually orientate in response to light and currents,” says Mike.

Another interesting trait belonging to the box jellyfish is that they have clusters of eyes, leading to the belief that they can avoid objects and actively hunt prey.

“The box jellyfish are capable of actually detecting images rather than just light and dark,” Mike says. 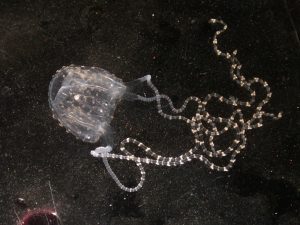 White, with hundreds of fine, short tentacles, “moonies” are largely found in marinas and harbours around Australia, 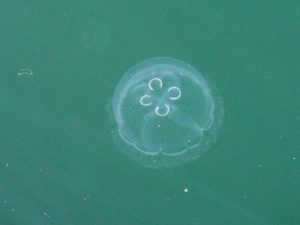 says CSIRO research scientist Dr Lisa-Ann Gershwin. “There’s something about man-made structures that moon jellies just love,” Lisa says.
The majority also have four distinctive rings in their bodies, although this varies from one to eight.

The moon jelly is one of the favourite foods of many species of turtles. (Image: Dr Lisa-ann Gershwin)

Also known as “giant jellyfish” or “hair jelly”, the lion’s mane has a powerful sting. They also have a disc-shaped bell, and small fish live near the bell for protection against predators. 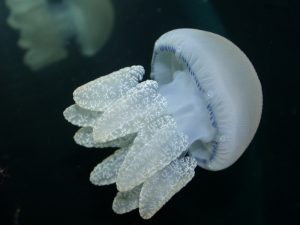 Found around Australia, particularly in estuaries, blubbers are brown, blue or white, says Lisa. They have short, stumpy tentacles Mike likens to

broccoli, and live up to a year-and-a-half – longer than most species.

Common along Australia’s east and west coasts, the white-spotted jellyfish is a large, attractive species that only live for a couple of months.
The species also hitched a boat ride to North America and has invaded the Gulf of Mexico, says Mike. 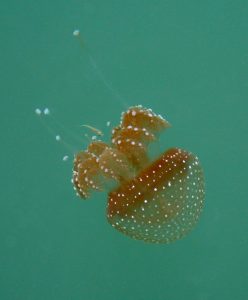 With a reputation of inflicting excruciating pain that sends victims into shock and often leads to death by drowning, the box jellyfish is the most notorious of species in Australian waters. But not all are as dangerous as the Chironex fleckeri. There are about 50 kinds of box jellyfish and they have tentacles spanning three metres that are covered with up to 5000 nematocysts. They are found across northern Australia between October and May.